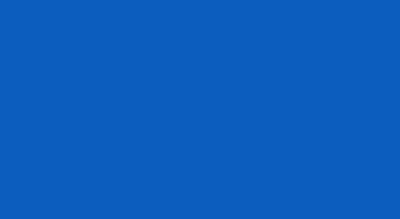 For centuries the Border hills have been grazed by stock making them the beautiful scenic landscape which the natives and thousands of visitors admire.

The first mention of sheep in these hills is from 1370 – “a small, but hardy race” in the Cheviot Hills. Wool was the chief source of wealth to the owners and, along with their hardiness, secured their popularity in the region but unfortunately also with Border Reivers.

DEVELOPMENT OF THE BREED

In order to try to improve the quality of the wool, 3,000 Merino sheep were shipped into Berwick in 1480 with another consignment less than a century later. The Monks, who kept a large number of sheep in the local valleys, were keen to improve the quality of their produce and tried crossing them with the Merino. But this was not a success as the progeny would not ‘rake’ their ‘hefts’ and were prone to foot rot. At this time the towns in the Borders were becoming reliant on wool to keep the increasing Tweed mills working.

Much of the early development of these sheep is attributed to James Robson of Belford who travelled the country in search of the right stock to improve his stock. He found what he was looking for in the Lincolnshire and returned home with three rams from Mr Mumby from Barton-upon-Humber. Crossing the larger sheep from the south with his own ewes proved a great success and rams from Belford quickly became highly regarded in the local hills, due to their ability to produce good strong sheep – but more importantly with more wool.

THE WORK OF SIR JOHN SINCLAIR

In 1791, the British Wool Society was formed under the guidance of Sir John Sinclair who is regarded as one of the most important figures in the history of agricultural improvement. The Society carried out intensive field studies of many native and continental sheep breeds with the aim of improving the national flock.

History of the Cheviot Sheep 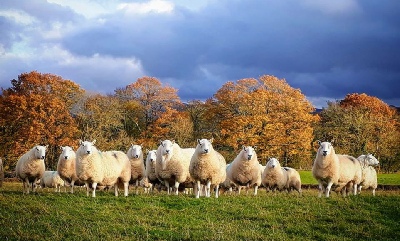 Sir John selected the native long wooled hill sheep found in the Border’s Cheviot Hills from all the breeds he had seen and named them Cheviots for the first time. He believed these to be perfect mountain sheep both in respect to form and fleece. 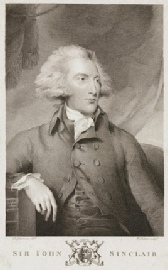 Sir John had 500 Cheviot gimmers taken to his Langwell Estate at Ulbester, Caithness for a trial. They proved to be very successful as their habits were suited to the terrain as they raked over the hills in search of food. The Cheviots flourished and in the following years, thousands were taken north, many from Northumberland. Some graziers experimented by crossing Cheviot ewes with Leicester and other rams. Many of these crosses were successful – bigger, earlier maturing with more fleece. These became known as the North Country Cheviot and have evolved into two distinct types. The sheep that developed on the hard rugged hills of Sutherland are known as the Hill or Lairg type, while the more fertile ground of Caithness has produced the bigger and heavier sheep known as the Caithness type.

Breeders in other areas were striving to improve the breed in the west, Mr James Bryden of Kinnelhead was aiming for a big framed, heavy shearing Cheviot. His type proved very popular and rams sold for phenomenal prices at his bi-annual sale held in Moffat. However very severe winters from 1859 to 1861 were to kill off the vegetation and his sheep were unable to cope. They had lost the hardiness factor and many died – from then the Bryden Cheviot was doomed but this was the start of the West Country type which had a tendency for wilder coats and horns.

Cheviot and Leicester sheep were exhibited at the Highland Show in 1832 and this was the ‘shop window’ to a wider audience. Classes at the Royal, Paris and Smithfield Shows soon followed. Sales, which up to now had been exchanges or on-farm deals with some breeders holding farm auctions conducted by Andrew Oliver & Son, changed with the company holding a sale of Cheviot rams in Hawick in 1854. This brought ram vendors and buyers to one place. The rams varied from six-shear to ram lambs. This was the forerunner of the Hawick Tup Fair which ran for over one hundred years.

A ram, “Blue Breast”, is reputed to have served nine score ewes in 1857 as old “Earl” had ‘failed to fulfil his duty’. Two of his sons sold at Hawick in 1860 to Wales (£50) and Sutherland. Rams at this time were allowed to mature naturally and many were sold as 4 to 7-shear although the majority were sold as 2-shear having been used as dinmonts. 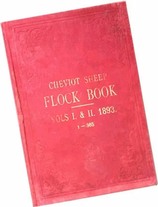 FORMATION OF THE CHEVIOT SHEEP SOCIETY

Following requests for more information on pedigrees, a meeting was held on 27th February 1891 chaired by Mr John Robson of Newton and the Cheviot Sheep Society was formed.

Among those present were Mr Fletcher, Jura; Mr Keegan, Enniskerry, Ireland and Mr Scott, Lesbury, Northumberland. The first Flock Book, Volumes 1 & 2 were published in 1893. An extract from the first book – “The perfect Cheviot is one which will live and thrive well on the hardest keep, and when taken to better and lower ground prove itself – by growing larger and becoming fat. Horns are permissible but not desirable.” The Cheviot were the first breed to have a Flock Book.

The Leicester/Border Leicester were a very popular breed of sheep and these crossed with a Cheviot ewe, produced the Half-Bred lamb, one of the best dual purpose sheep ever. This in turn helped the trade for the Cheviot draft ewe.

With the editions of the Flock Book, interest in the Cheviot spread abroad and a good Export Trade materialised between 1930 and 1940. Despite the war, sheep were sent all over the world to every continent. When one shipment to Canada was sunk by a German U-boat, the demand was such that another was sent out. There still remains interest from some of the original families who imported Cheviots as their bloodlines are very tight but, due to import regulations, they are unable to buy.

After the war, thousands of acres of the best of sheep land was planted with Sitka spruce by the Forestry Commission. This took out whole valleys and some of the original farms where Cheviots started. For example the farms of Byrness, Hyndlee and Keilder. were all joined up into a blanket forest. Much more was to follow.

In the 1960’s, some breeders reported having deformed lambs – ‘stumpies’ – but many would not admit it. This happened when both sire and dam carried a particular recessive gene. With the help of the Flock Book and verbal discussion, this condition was soon contained by culling the relevant sires.

Scrapie, a sheep disease, not seen in Cheviots for a generation, was reported in the 1990’s. A voluntary testing scheme was set up which soon became compulsory with help from the Moredun Foundation. Again culling was the answer which did not go down well with some, as they felt it was taking out a lot of good bloodlines.

When Hawick Mart was sold, the principle ram sale was moved to Lockerbie. For whatever reason, there was an increase seen in the number of shearlings sold.

A huge blow to the breed came in 2001 with a Foot and Mouth outbreak and the resultant loss of many flocks. This meant the reduction in an already small gene pool. Although many restocked with Cheviots, some breeders sought the Lairg type or other breeds. A video ram sale was held as Marts were closed except for fat stock. This was the third outbreak of F & M in the north since 1952.

By the late 1990’s and into the 2000’s, the tried and trusted Half-Bred were very scarce but was replaced by the Cheviot Mule, Cheviot x Blue-Head Leicester, which was good for the draft ewe trade.

The Brecknock Hill Cheviot has developed from the Scottish Cheviot that was introducted into Brecknockshire during the latter part of the 19th Century.

Both the pure and cross bread ewe will produce quality prime lamb that meets today’s requirements. These lambs have excellent carcass confirmation reaching to a consistent ‘R’ Grade or above.

Brecknock Hill Cheviot Wool speaks for itself as three members of the society have been British Wool Producer Of The Year.

Don’t just dream about these eye catching sheep with attractive white faces, strong legs and erect ears. Wake up to their excellent body conformation and quality wool. Wake up to ‘The Hill Breed’ taking the lead.

This new strain of Cheviot thrives on exposed hills because of it’s hardiness.

Not only are they kept as pure flocks for breeding purposes they can be successfully crossed with native Welsh Hill breeds, Border Leicesters, Suffolks and more recently Blue Face Leicester and Continental rams.